"This route expansion solidifies United's position at San Francisco as the gateway airline serving destinations across the Pacific, the continental United States, as well as to Europe and beyond," said Oscar Munoz, United's CEO. "It serves as a fitting capstone to all our efforts that made 2018 a breakthrough year for United, from delivering strong financial performance to currently leading in on-time departures for the second year in a row."

"San Francisco continues to be a cultural and economic hub for the world," said U.S. Senator Dianne Feinstein. "These new routes will expand international travel to and from San Francisco International Airport, helping us forge stronger connections between our city and other major destinations around the globe."

"This is great news for all of our customers and employees in the Bay Area, and a sign that United is deeply committed to growing San Francisco and adding unique and exciting destinations across the globe," said Janet Lamkin, United's President of California.

United has been a Bay Area company for 90 years and employs 14,000 people in the region, including 2,500 industrial jobs at its maintenance base, which recently celebrated its 70th anniversary of operation. United continues to invest in the airport, this year opening the 28,000-square foot Polaris lounge near Gate G92 in International Terminal G.

United recently announced it will offer nonstop daily year-round service between San Francisco and Amsterdam. With this new flight, United will be the first U.S. carrier to fly between California and Amsterdam. United currently serves Amsterdam nonstop from its hubs in Chicago, Houston, New York/Newark and Washington, D.C. The new San Francisco service begins on March 30, 2019 and will be operated with Boeing 787-9 Dreamliner aircraft.

United is adding a second flight – flown four times per week – between San Francisco and Seoul, South Korea. The airline has served Seoul for more than 30 years from San Francisco. The second flight will provide customers with new time and itinerary options, while providing convenient connections to more than 80 destinations. The additional flights begin on April 1, 2019 and will be operated with Boeing 777-200ER aircraft.

This fall, United began the only nonstop service offered by a U.S. carrier between the mainland U.S. and Tahiti with its San Francisco – Pape'ete flight. The airline recently announced it is extending its Tahiti schedule to year-round service from San Francisco. Year-round service on Tuesdays, Thursdays and Saturdays begins March 30, 2019. United operates Boeing 787-8 Dreamliner aircraft between San Francisco and Pape'ete.

Beginning March 30, 2019, United will extend service between its West Coast hub in San Francisco and Auckland to year-round with three-times-weekly service. In partnership with Air New Zealand, United's flight arriving in Auckland offers passengers more than 20 connections across the region and the return trip utilizes United's extensive route network in San Francisco, which provides connections to the United States, Canada, and Latin America. United's extended service between San Francisco and Auckland will operate with Boeing 777-200ER aircraft. 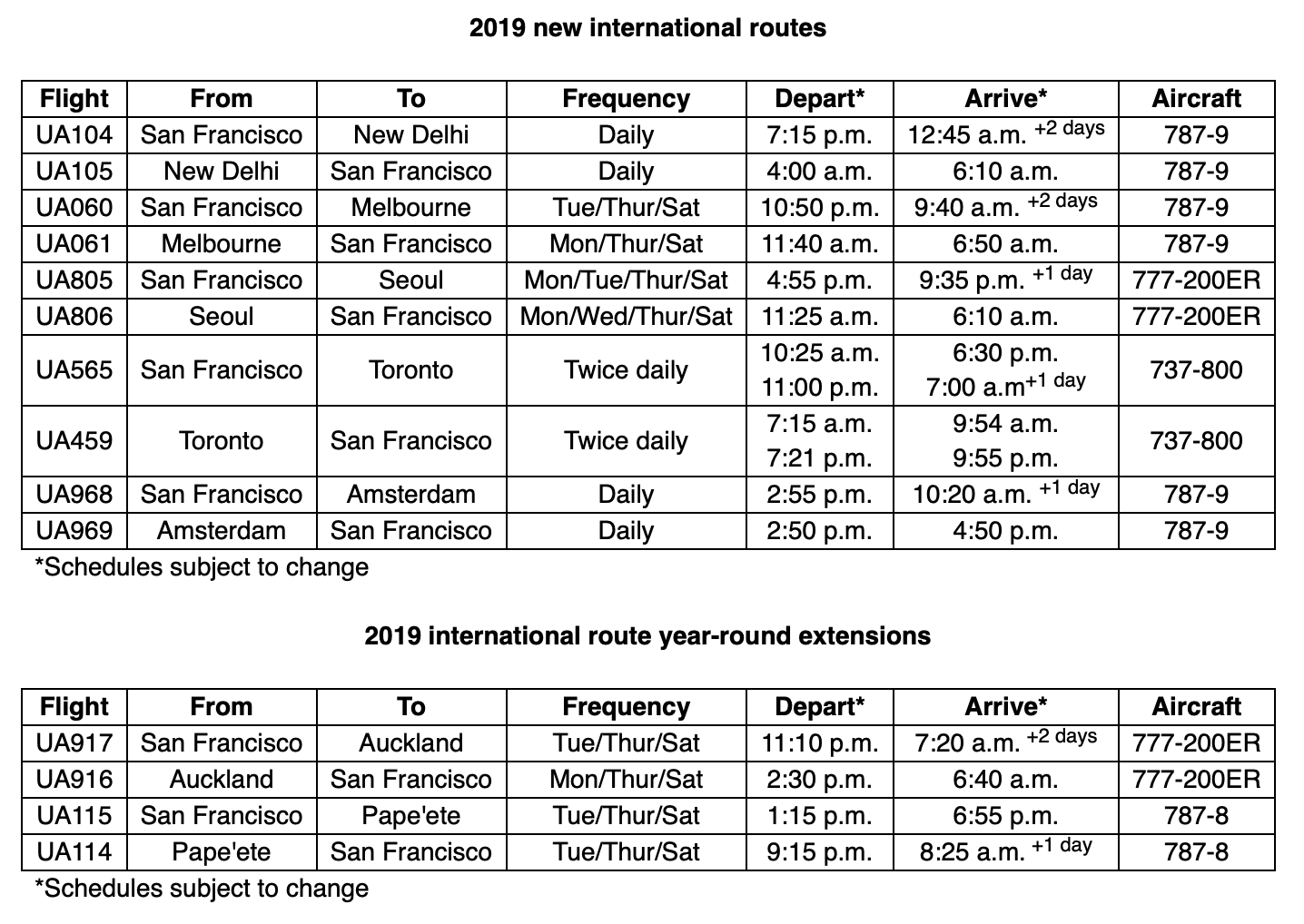