London/Dublin, June 29h 20I8: As part of IBA’s on-going research into the challenges surrounding transitions, the leading aviation consultancy has recently revisited and updated its 2016 pulse survey by asking a selection of lessors and lessees about the key issues they face during the redelivery process.

According to IBA, the latest findings from the report suggest that although there is a greater understanding of the scale and resourcing of redelivery projects compared to 2016, there is still a challenge around planning and execution.

The key findings from the research are:
· Both lessors and lessees agree that the redelivery process is not started early enough
· Records and engines top the list of the most challenging elements of a redelivery
· Resource, liquidity and increased returns are key concerns for 2018.

In terms of late returns, IBA has seen a drop in the number of disagreements which certainly echoes the improvements to drafting that have been seen in the last two years. There have also been improvements with regard to lessee’s demands being met by lessors, such as delivery conditions for interior configuration. Less positively, engagement is still taking place too late. Planning redeliveries late inevitably makes juggling the numerous parallel processes much more difficult. Unscheduled repairs and failed borescopes were identified once again as a primary reason for late redeliveries, suggesting lessees continued to be caught out.

Q: As a Lessor, how often do you feel that the lessee engages too late in the redelivery process? 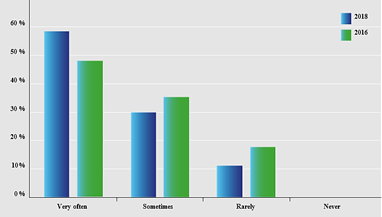 Furthermore, the results suggest very strongly that lessors feel lessees engage too late. This is again very consistent with the responses from the last survey which is interesting given the increased sample size on this occasion. Indeed, the percentage of lessors responding “very often” has grown from 47% to almost 60%. When asking the same question of lessees, IBA have observed a swing suggesting that lessees are much more aware of the need to engage early but are perhaps failing to execute the preliminary tasks as early as they should.

This year, IBA added additional questions designed to capture changes in the market and the shifting sentiment of both lessors and lessees. Respondents were asked what changes to end of lease trends they had noticed in the last 12 months. Many pointed to continued low fuel prices, regional instability and demand for capacity as reasons for the increase in extensions for narrow-bodies, while some report having noticed fewer extensions for wide-bodies – a potential concern for lessors due to the difficulties surrounding transitions. Regional distress caused by competition between Qatar/Middle East and the US was also noted as having an impact on end of lease trends in the last year.

Q. What redelivery challenges are being faced this year?

The final question in this year’s survey focused on redelivery challenges specifically in 2018. IBA reports that 94% of respondents confirmed they foresee a definite challenge with regard to redeliveries in 2018. MROs were flagged as being a bottleneck by 19% of respondents while MROs themselves often argue they are engaged too late by the lessees. IBA canvassed a number of MROs on the subject and several commented that they found the returning lessees to be reasonably organised for the End of Lease check (EOL) and were more frustrated when dealing with returning lessors who want last minute changes to meet the next lessee’s demands. Other challenges put forward include insufficient lessee resources as well as a lack of lessees in general, especially for wide-bodies.

IBA concludes that while an understanding of the effort involved has improved, execution of a redelivery still appears to be a challenge. Redeliveries continue to test lessees and lessors both tactically and strategically. It is clear that there are further improvements to be made in planning and resourcing redeliveries. There are also potential red flags emerging around supply with 22% of respondents considering a lack of new lessees to be a cause for concern in 2018. According to IBA.iQ and IBA’s analysts, the current picture does not yet suggest that more popular aircraft are failing to be re-leased, however IBA will continue to monitor parked aircraft and re-lease rates carefully.