"Our dedicated team of Swoopsters have worked tremendously hard to deliver exactly what we set out to. Today marks an important milestone for Swoop, and is equally as meaningful for Canadian travellers," said Steven Greenway, President and Chief Executive Officer of Swoop. "Our inaugural journey on #Abbotsford is just beginning. We'll be progressively rolling out new routes and destinations in the coming months and years to come."

Steven will join media and travellers on the inaugural flight from Hamilton to Abbotsford, attending celebratory events in both cities.

"I'm very pleased about the partnership between YXX and Swoop as it will support a vibrant economy for our region, while offering regular service to many destinations within Canada and, hopefully in the near future, international flights from YXX," said Mayor Henry Braun. "As one of the only ultra-low-cost airports in North America where the airport business model aligns with ultra-low-cost carriers, YXX is a perfect fit for Swoop, positioning Abbotsford to continue to grow as the Hub of the Fraser Valley."

"Halifax Stanfield is delighted to be a part of Swoop's initial route network," says Joyce Carter, President & CEO of Halifax International Airport Authority. "Experience shows that low-fares stimulate demand and we welcome opportunities that provide travellers with more options, while fostering visitation to our beautiful region."

The excitement continues on June 25 when Swoop activates service in Edmonton, AB and Winnipeg, MB. Over the course of the summer, Steven will visit each of the inaugural cities, to share Swoop's appreciation for the meaningful teamwork and effort it has taken to get off the ground. Swoop's initial schedule offers service from Abbotsford, Edmonton, Winnipeg, Hamilton and Halifax as follows: 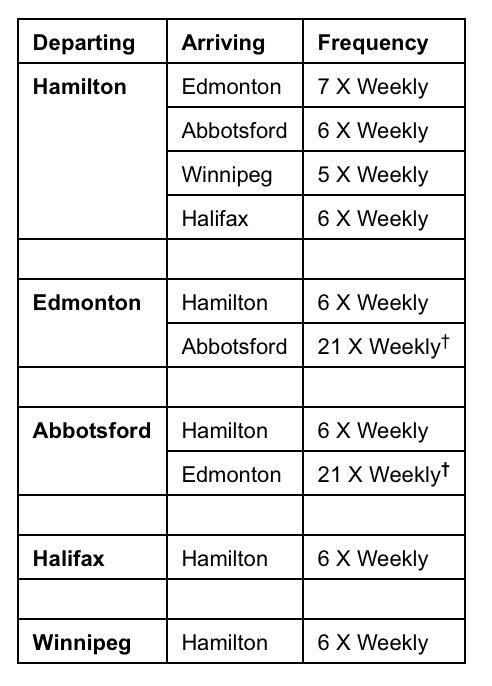 Norwegian continues expansion in Ireland with first route to Canada