Wednesday, January 10, 2018 — Brussels Airlines welcomed 9.1 million passengers on board its flights in 2017, an increase of 17.2% compared to the previous year. The passenger load factor grew to a record average of 78.5% throughout the year.

Brussels Airlines closes 2017 with a total of 9,077,178 passengers, a record in the company’s 15 year history. The 1.3 million additional passengers were welcomed throughout the entire network. All sectors showed significant growth, with the highest increase recorded on the European network (+16.7%), followed by the Middle East (+14.3%), North America (+14.0%) and Africa (+13.2%), where the airline passed the 1 million passenger mark for the first time. With Mumbai, Brussels Airlines opened its first Asian destination in 2017. The new route attracted 80,450 passengers since the first flight on 30 March.

Brussels Airlines’ strong passenger growth is mainly due to the increased productivity of its fleet, the replacement of Avro aircraft (100 seats) by bigger Airbus A320 (180 seats) and the integration of Thomas Cook Airlines Belgium’s activities . On its long-haul network, the airline added an additional Airbus A330 to its fleet to operate the new Mumbai route and to increase the number of flights to African destinations. The pressure on airline ticket prices remained very high in 2017. Thanks to its increased offer, Brussels Airlines was able to continue to propose competitive fares and attract even more customers.

Brussels Airlines invested heavily in its leisure offer in 2017, as it continues to do in 2018, when the airline adds 26 summer holiday destinations to its network, thanks to the intensified cooperation with Thomas Cook Belgium.

The seat offer (ASK) grew by 14.5%, but the number of passengers grew faster, resulting in a seat load factor of 78.5%, the highest ever recorded for Brussels Airlines.

Brussels Airlines Cargo showed very positive results as the transported volumes grew by 22.6% and the cargo load factor increased by 10.3 percentage points, amounting to 67.7%. The cargo volumes increase is due to several initiatives to better forecast the belly capacity and therefore maximize the use hereof, and the addition of Mumbai as a destination.

December was again a month of growth for Brussels Airlines, although this growth was slowed down by the winter weather conditions and subsequent temporary closure of Brussels Airport on 11 December, which forced the airline to cancel 218 flights.

The slight decrease on the Transatlantic network (-2.6%) is due to the fact that there is a lower flight frequency on the Toronto route compared to 2016. The decrease on the Middle East sector (-6.2%) is due to winter cutbacks on the Tel Aviv route.

The significant growth on the African sector (+17.3%) is mainly due to the start of the intensified partnership with Thomas Cook Belgium in October, which added 5 new winter holiday destinations in North Africa to Brussels Airlines’ network.

Brussels Airlines Cargo recorded a significant increase in its transported volumes (+22.5%) and reached a Cargo load factor of 74.1% (+8.0 percentage points).

These statistics do not include the passengers on board of the chartered flights operated by Brussels Airlines for third parties. 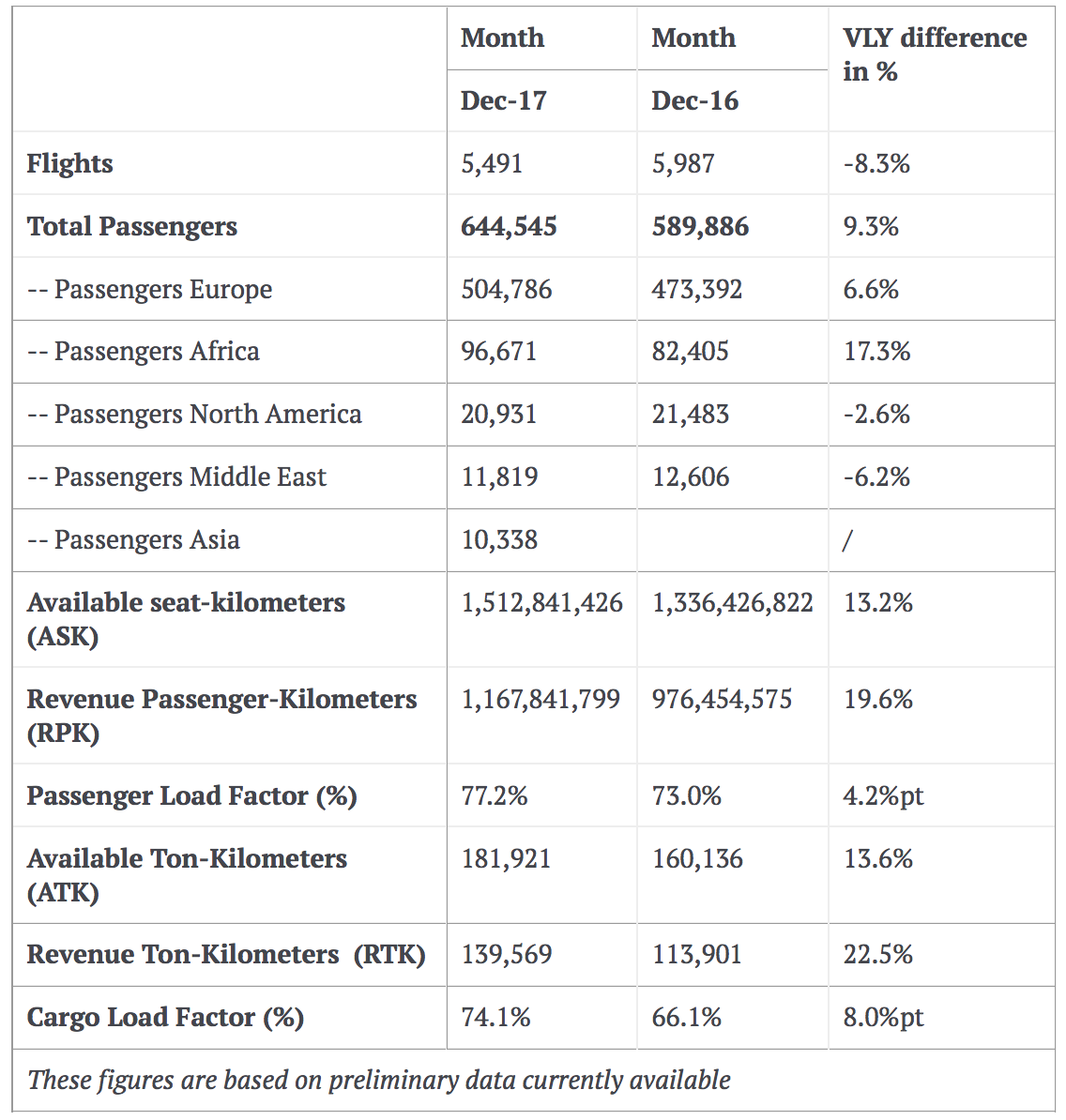