Ibec, through Financial Services Ireland, has today announced the establishment of a new representative body, Aircraft Leasing Ireland (ALI), to ensure that Ireland retains its number one position globally in aircraft leasing. The Irish aircraft leasing industry supports 5,000 jobs and contributes over €550m annually to the local economy. ALI, which will be formally launched by the Minister for Finance, Paschal Donohoe, TD, at an event in Dublin today, is the first representative body specific to aircraft leasing and includes all of the major Irish-based aircraft leasing companies.

Over 60% of all leased aircraft worldwide are managed by Irish-based leasing companies. However, it is important not to be complacent, with other financial centres actively seeking to attract the aircraft leasing industry.

ALI will act as a coordinated voice for the industry. Its remit will be to further develop Ireland’s aircraft leasing infrastructure including:

A particular focus on skills and education to service the industry’s growing employment needs;
To expand Ireland’s network of double taxation agreements; and
To build the ecosystem of services and employment which have been directly created as a result of the industry’s location here. This includes MRO (Maintenance Repair and Overhaul) at Dublin and Shannon Airports and a growing number of specialised financial and legal services firms.
Minister Donohoe welcomed the establishment of Aircraft Leasing Ireland saying “Ireland is a global leader in the aviation financing industry due in part to our extensive network of double taxation treaties, our specialist skilled staff and our focussed support for the sector through, for example, the 2018 Action Plan for Ireland’s IFS2020 Strategy; where aviation finance has been identified as one of the priority areas. Ireland’s aviation sector has gone from strength to strength in recent years, and, as a former Minster for Transport, it has been a great source of pride to see the growth that has taken place, the number of jobs that have been created and the impact the industry has had on the wider economy. I wish Aircraft Leasing Ireland every success in growing this dynamic and evolving industry and further supporting its members in the years ahead.”

The Chair of ALI and COO of SMBC Aviation Capital, David Swan, commented, “Ireland effectively invented aircraft leasing in the 1970s, pioneered by Tony Ryan. It is with a great sense of national pride that in the intervening decades, we have grown this into a multi-billion dollar industry and Ireland is by far the leading global centre.

“This industry supports a growing number of high value jobs across the leasing, technical and professional services areas. However, we cannot become complacent and the principal objective of this body is to work with government to ensure that Ireland remains the best place in the world to establish and run an aircraft leasing company.”

Danny McCoy, Chief Executive of Ibec concluded, “Ireland has developed a world class capability in aircraft leasing over several decades and is now the recognised global leader in the industry. This is a significant achievement for the country and we are delighted that this important industry is establishing a new representative body under the Ibec umbrella.”

ALI is made up of all the major aircraft leasing companies, including four of the largest global lessors, SMBC Aviation Capital, GE Capital Aviation Services (GECAS), Avolon and AerCap. Declan Kelly, CCO of GECAS, was appointed to the position of Vice Chair and will succeed David Swan at the end of his two-year tenure in 2020.
To review the ALI terms of reference and to review the list of Council members please visit www.aircraftleasingireland.ie 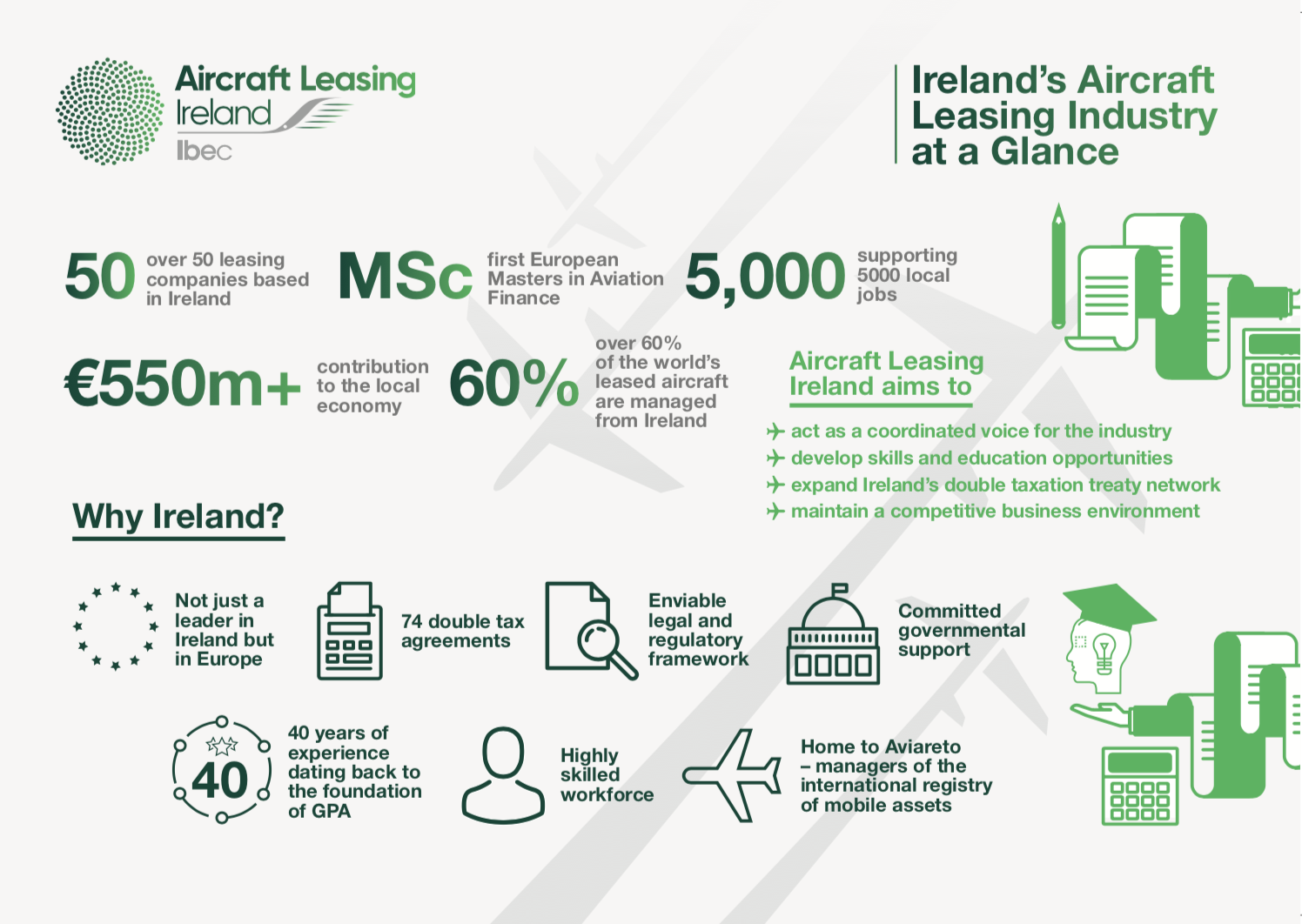