Hyderabad, 09th March 2018 - India will require 1,750 new passenger and cargo aircraft over the next 20 years to meet an exponential rise in both passenger and freight traffic, according to Airbus’ latest India Market Forecast. To help meet this growth, India will need 1,320 new single-aisle aircraft and 430 wide-body aircraft valued at US$255 billion.

While much of the air traffic growth is expected to be driven by the fast expanding economy, rising wealth and urbanisation, ambitious government backed regional connectivity programmes are also set to enhance demand for air travel. By 2036, Indians will each make four times as many flights as today. As a result, traffic serving the Indian market is forecast to grow 8.1 per cent per year over the next 20 years, almost twice as fast as the world average of 4.4 per cent.

Domestic Indian traffic is expected to grow five-and-half times over the next 20 years (2017-2036) reaching the same level as USA domestic traffic today, making it one of the world’s fastest growing markets, according to Airbus’ latest India Market Forecast for the period.

"Make in India is at the heart of our strategy. Airbus has the largest footprint in India of any International aircraft manufacturer, nationwide across all aircraft programmes. Our sourcing volume has grown 16 times over the past ten years and it is currently at more than US$550 million annually,” said Srinivasan Dwarakanath, President Airbus Commercial Aircraft in India.

India is set to become the world’s third largest aviation market by 2019/20 and Airbus is well positioned to partner its growth with backlog orders of over 530 aircraft to date.

The complete Airbus product line comprises the best-selling A320 Family in the single aisle market, the popular A330 and A330neo, the A350 XWB in the mid-size widebody category and the flagship A380 in the very large aircraft segment. In the freight market Airbus currently offers the new-build A330-200F and the Passenger-to-Freighter (A330P2F) programme.

India highlights:
• More than 70% backlog order share; More than 60% of in-service fleet
• 8.1% annual growth in passenger traffic (global average 4.4%)
• India is set to become the world’s third largest aviation market by 2019/20
• New aircraft needs: 1,320+ single aisle, nearly 430 wide-bodies / US$255 billion
• Indian passenger traffic expected to grow by five-and-half times
• By 2036, Indian passengers will on average make four times as many flights as today
• On average one Airbus aircraft will be delivered to India every week for next 10 years
• Airbus secures 6,000 jobs including 1,500 engineers in India
• Annual sourcing from India at more than US$550 million 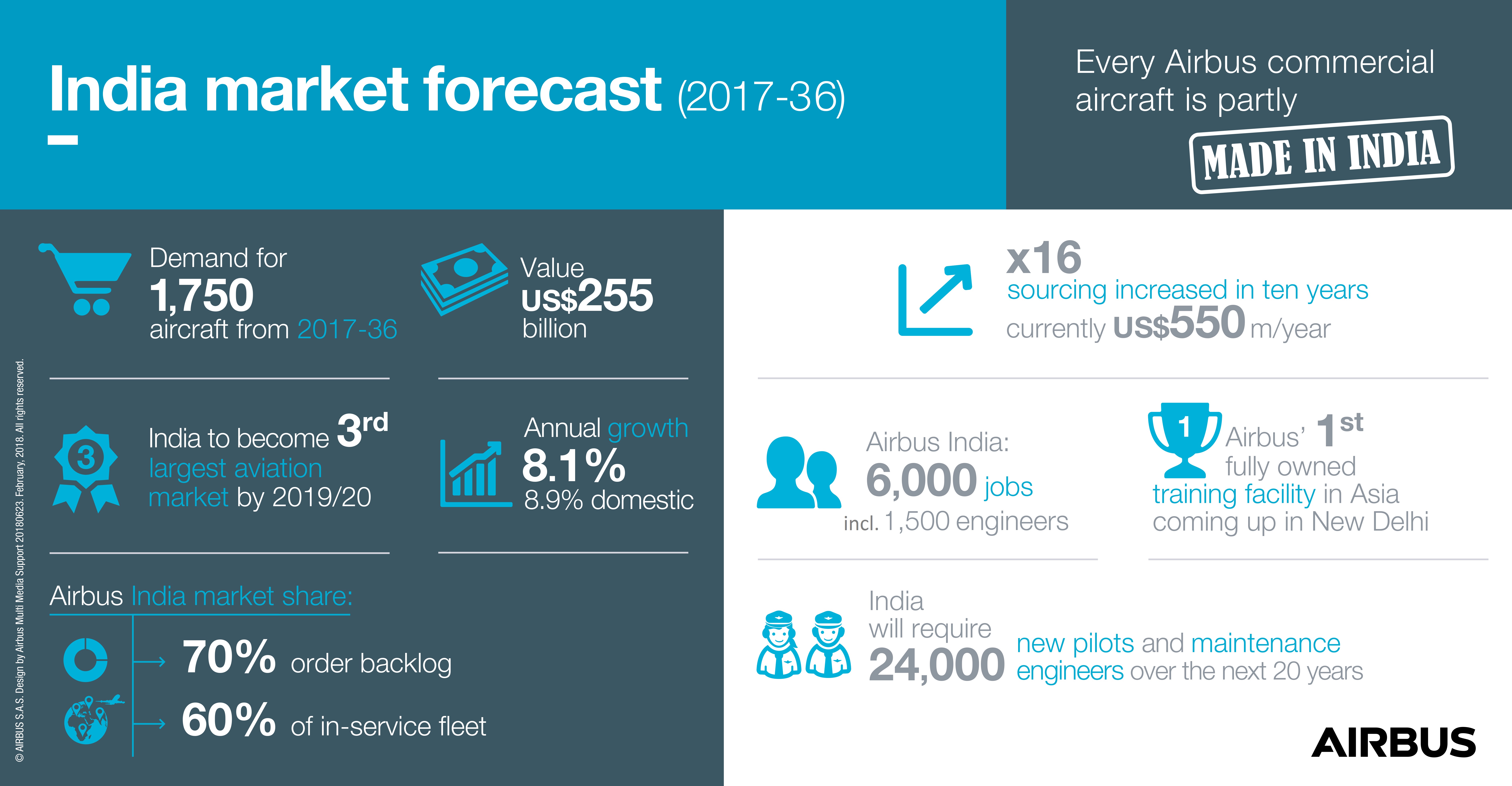