“We were active on several fronts this quarter as we acquired three aircraft, including another new 737 MAX 8, repurchased a further 1.5 million shares and refinanced our unsecured notes that were due 2020,” said Colm Barrington, CEO of FLY. “We have acquired eight aircraft in the first nine months of 2017 for a total of $403 million, growing the fleet to 84 aircraft. Our growth capacity remains strong with the ability to acquire over $2 billion worth of new aircraft without the need to raise additional funds.”

“FLY has repurchased a total of 3.6 million shares so far this year, and we ended the quarter with a net book value per share of $18.95,” added Barrington. “We see great value in our shares and will continue to repurchase stock under our current buyback program.”

“We also remain focused on driving down our cost of debt,” said Barrington. “The refinancing of our unsecured notes will result in substantial savings, reducing our borrowing costs by nearly $10 million per year starting in 2018. Further, following quarter end, we repriced our term loan, which will result in an additional $1 million of annual interest cost savings.”
Financial Results

A reconciliation of Adjusted Net Income to net income (loss) determined in accordance with GAAP is shown below.
Aircraft Impairment

As a result of a lessee’s insolvency filing during the third quarter, FLY recorded an impairment charge of $22.0 million on a 2001 vintage Airbus A330-200 to write the aircraft down to its estimated current market value. 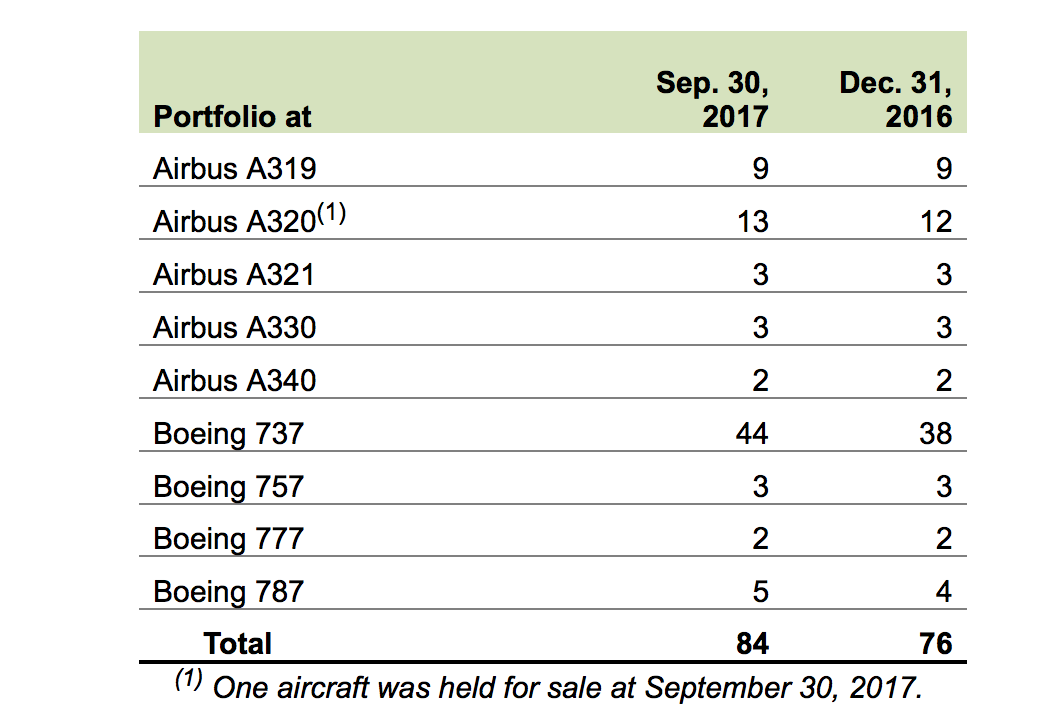 At September 30, 2017, the average age of the portfolio, weighted by net book value of each aircraft, was 6.2 years. The average remaining lease term was 6.5 years, also weighted by net book value. At September 30, 2017, the 84 aircraft were generating annualized rental revenue of approximately $366 million. FLY’s lease utilization factor was 100% for the third quarter of 2017.