“FLY is reporting a solid first quarter based on a substantial increase in operating lease rental revenue,” said Colm Barrington, FLY’s Chief Executive Officer. “Our quarterly net income of $9.6 million – despite minimal end of lease income and no benefit from aircraft sales – represents the strong growth in our core leasing business. Our earnings of $0.34 per share are more than double the result from the same quarter last year.”

“The acquisition that we announced on February 28th is proceeding as planned, with AirAsia’s extraordinary general meeting scheduled for later this month,” added Barrington. “We expect that the initial stage of the transaction will be completed in the second and third quarters of this year. As we acquire these aircraft and deploy our capital over the course of the year, we expect to see FLY generate strong shareholder returns.”

A reconciliation of Adjusted Net Income to net income determined in accordance with GAAP is shown below.

AirAsia Update
On February 28, 2018, FLY signed definitive agreements with AirAsia Berhad ("AAB") and its subsidiary, Asia Aviation Capital Limited, under which FLY will acquire 54 Airbus narrowbody aircraft and seven CFM engines on lease to AAB and its affiliates, and one Airbus narrowbody aircraft on lease to a third-party airline. In addition, FLY will acquire the option to purchase an additional 20 Airbus A320neo family aircraft, not subject to lease, which begin delivering from the manufacturer as early as 2019. These transactions, taken together, are referred to as the “AirAsia Transactions.”

Initially, FLY will acquire 34 Airbus A320-200 aircraft and seven engines. FLY expects to acquire these aircraft and engines in the second and third quarters of 2018, following the approval of the AirAsia Transactions by AAB’s shareholders at their extraordinary general meeting scheduled for May 14, 2018.

Aircraft Portfolio
At March 31, 2018, FLY had 86 aircraft in its portfolio, with leases to 45 airlines in 28 countries. The table below does not include the two B767 aircraft owned by a joint venture in which FLY has a 57% interest. 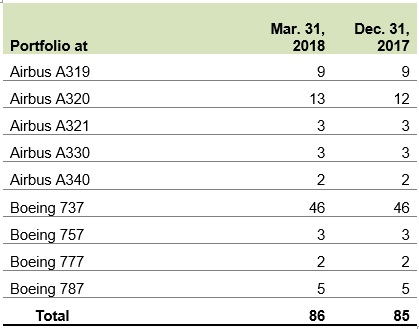 At March 31, 2018, the average age of the portfolio, weighted by net book value of each aircraft, was 6.5 years. The average remaining lease term was 6.2 years, also weighted by net book value. At March 31, 2018, FLY's 85 aircraft on lease were generating annualized rental revenue of approximately $368 million. One aircraft was off-lease at quarter end, which was subsequently delivered to a new lessee in April 2018. FLY’s lease utilization factor was 99% for the first quarter of 2018.