easyJet has delivered a strong performance in the third quarter with robust customer demand driving outperformance in our passenger and ancillary revenue growth. Disruption across Europe continues to be an industry wide issue and is having an impact on revenue, cost and operational performance, with the main drivers being European industrial action and air traffic restrictions. Despite this increase in disruption easyJet has increased its headline profit before tax guidance for Financial Year 2018 to between £550 million and £590 million.

Passenger1 numbers in the third quarter increased by 9.3% to 24.4 million, driven by an increase in capacity2 of 8.9% to 26.2 million seats which was lower than originally planned due to disruption. Load factor3 increased by 0.3 percentage points to 93.4%.

Total revenue per seat excluding Tegel operations increased by 4.8% at constant currency. This performance has been driven by:

easyJet now expects H2 revenue per seat at constant currency to increase by low to mid-single digits. Current data shows that uptake by competitors of overlapping Monarch capacity continues to be lower than expected into Q4, however, some impact on late yields may be expected from continued warm weather.

Operational performance for the quarter has been significantly impacted by external factors, in particular the regular and sustained ATC industrial action in France as well as the impact of severe weather. easyJet experienced 2,606 cancelled flights in the period (compared to 314 in Q3 2017) of which the significant majority were due to industrial action, ATC restrictions or severe weather. easyJet is continuing to invest in its resilience programme to improve its On Time Performance (OTP) and reduce cost, through initiatives in ground handling such as DHL, data-driven initiatives such as predictive maintenance, and scheduling improvements.

easyJet's underlying cost performance has been solid. Headline cost per seat excluding fuel at constant currency increased by 4.0% in the quarter, higher than expected, reflecting:

easyJet's cost programme has delivered savings in particular in airport costs, driven by discounts on additional passenger volumes, and fleet up-gauging. Total cost programme savings in the financial year to date are £85 million.

Mainly as a result of the increased disruption in Q3 easyJet now expects full year cost per seat excluding fuel at constant currency to increase by circa 3%.

In this start-up phase easyJet continues to prioritise its operational delivery and build its market presence. Load factors are continuing to increase, are now consistently above 80% and have reached 86% for June, reflecting strong brand traction in Berlin.

Revenue per seat is weaker than previously guided due to recent additional capacity in the Berlin market, which easyJet has been less able to counteract due to prioritising the protection of the slot portfolio and operating an inherited inefficient schedule for the peak summer season. As a result, headline losses for Tegel operations for the year are expected to be circa £125 million for the full year, compared to previous guidance of up to £95 million.

Despite this, easyJet is progressing well with its integration activity at Tegel and now expects to incur £50 million during the year in non-headline costs. This is lower than previous guidance of £60 million, as the fleet has transitioned into operations earlier than expected. At 30 June 10 easyJet aircraft were operating alongside wet leased fleet and easyJet now has 441 Tegel based pilots and cabin crew.

easyJet's total loss for Tegel operations this year is therefore expected to be £175 million (£160m estimated on acquisition), reflecting the revenue environment.

easyJet is committed to capitalising on the strategic opportunity in the Berlin market and targets to reach a break even position in Financial Year 2019 as it optimises its schedule over the next 18-24 months.

"easyJet has delivered a strong performance during our third quarter driven by robust customer demand. The airline continues to go from strength to strength attracting more than 24 million customers in the period who chose to fly with us for our leading network of top European destinations, low fares and outstanding service.

We have also seen the continued growth in ancillary revenues, mainly due to more passengers choosing to buy allocated seating and hold bags.

With easyJet on track for a positive summer trading period during the fourth quarter, we are raising our guidance for full year headline profit before tax for financial year 2018 to between £550 million and £590 million." 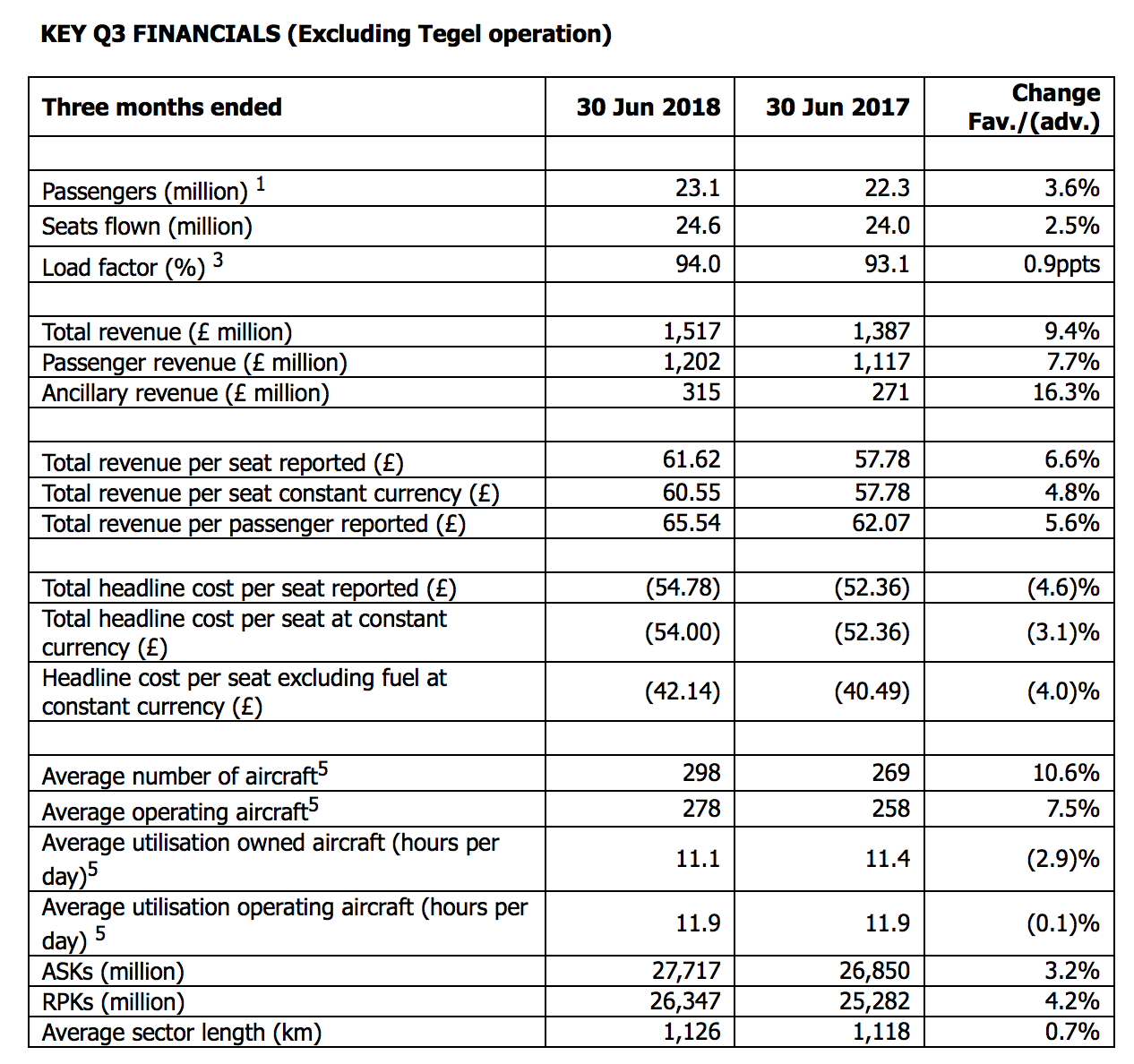