Delta Air Lines today reported operating performance for April 2018. The company carried 15.9 million passengers across its broad global network, a record for the month of April.

Raising $1.6 billion of unsecured debt through a mix of three-, five-, and 10-year notes at a blended rate of 3.85 percent. The proceeds from this offering were used to refinance current secured loans, lowering Delta's overall interest expense by $20 million annually and further strengthening the company's financial foundation.

Offsetting carbon emissions for more than 170,000 customers, in honor of Earth Month. Since 2012, Delta has achieved carbon neutral growth through the purchase of more than 8 million carbon offsets, which have helped Delta invest in environmental sustainability in more than 15 countries worldwide.

Adding more flights between New York-JFK and the Caribbean and extending year-round nonstop access to Europe this winter from several U.S. gateways including New York-JFK to Lisbon, Los Angeles to Paris and Amsterdam, Indianapolis to Paris, and Orlando to Amsterdam.

Completing the 15th Global Build with Habitat for Humanity, a global nonprofit organization that helps families build or improve a place they can call home. Delta employees partnered with China Eastern to help with the construction of six new homes for local families in Sancun, a small village north of Guangzhou, China.

The company's operating performance is detailed in the table below. 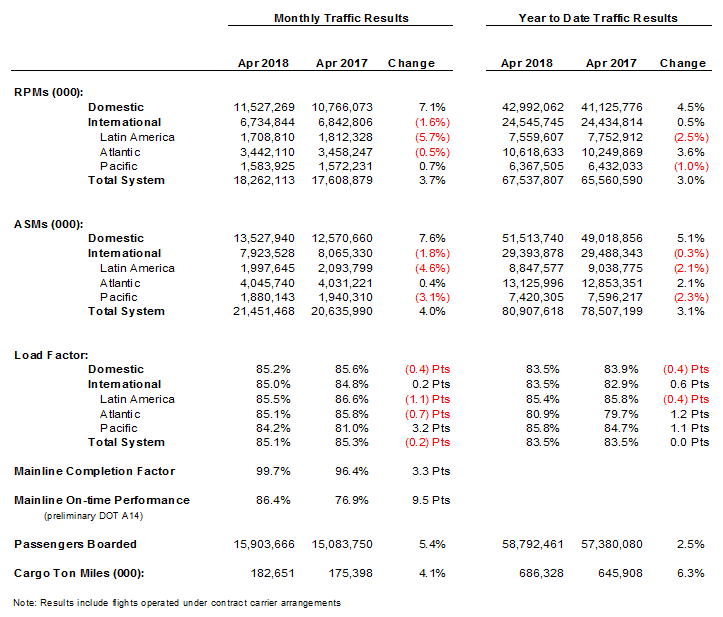