Delta Air Lines (NYSE: DAL) today reported financial results for the March quarter 2018. Highlights of those results, including both GAAP and adjusted metrics, are below and incorporated here.

Adjusted pre-tax income for the March 2018 quarter was $676 million, a $104 million decrease from the March 2017 quarter, as record revenues were offset by higher fuel prices and other increased costs including a $44 million impact from severe winter weather.

"The Delta people delivered a strong March quarter, and our record revenue was a direct result of the great service and operational reliability they provided for our customers. It's an honor to recognize their hard work with $183 million toward our 2018 profit sharing," said Ed Bastian, Delta's Chief Executive Officer. "We have confidence in our plan to grow earnings in 2018 through top-line growth, improving our cost trajectory, and leveraging our international partnerships."

Delta's adjusted operating revenue of $9.8 billion for the March quarter improved 8 percent, or $715 million versus the prior year. This revenue result marks a March quarter record for the company, and was driven by improvements across Delta's business, including a 23 percent increase in cargo revenue and a $78 million increase in total loyalty revenue. Delta's Branded Fares initiative drove $421 million in premium upsell revenue in the period, a 23 percent increase from the prior year.

"We are seeing Delta's best revenue momentum since 2014, with positive domestic unit revenues, improvements in all our international entities, strong demand for corporate travel and double-digit increases in our loyalty revenues," said Glen Hauenstein, Delta's President. "With our solid pipeline of commercial initiatives, delivered with industry-leading Delta service, we expect to maintain this momentum and deliver total revenue growth of 4 to 6 percent for the full year." 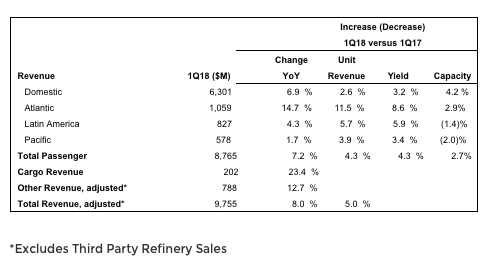 For the June quarter, Delta expects solid top-line growth and an improving cost trajectory will mitigate the impact of higher fuel prices. The company will also benefit from a reduction in its book tax rate.

Adjusted fuel expense increased $317 million, or 20 percent relative to March quarter 2017, as the year- over-year increase in market fuel prices was tempered by the lapping of prior year hedge losses and improved fuel efficiency. Delta's adjusted fuel price per gallon for the March quarter was $2.01, which includes $0.05 of benefit from the refinery.

CASM-Ex increased 3.9 percent for the March 2018 quarter compared to the prior year period driven by April 2017 wage increases and accelerated depreciation due to aircraft retirements. Unit costs were further pressured by approximately 1 point from the impact of severe weather and foreign exchange. Delta expects this period will mark the highest non-fuel expense growth for the year.

"We expect unit cost growth of 1 to 3 percent in the June quarter, as we lap prior year investments in our people and our business," said Paul Jacobson, Delta's Chief Financial Officer. "As we move through depreciation pressure from our fleet retirements and gain benefits from our upgauging and One Delta initiatives later in the year, we are on track for our 0 to 2 percent full year unit cost target."

Adjusted non-operating expense was flat year-on-year for the March quarter as a $62 million improvement in pension expense was offset by higher interest costs and the seasonality of joint venture partner earnings. The company expects 2018 full-year adjusted non-operating expense to be $200-250 million lower than 2017, due to pension expense savings.

Tax expense declined $117 million for the March quarter, primarily due to the reduction in Delta's book tax rate from 34 percent to 23 percent.

Delta generated $1.3 billion of operating cash flow, as the seasonal build of cash was partially offset by the $1.1 billion profit sharing payment to employees and a $500 million voluntary pension contribution in the March quarter, completing funding for the full year. Delta generated $173 million of free cash flow during the quarter, after the investment of $1.2 billion into the business primarily for aircraft purchases and improvements.

For the March quarter, Delta returned $542 million to shareholders, comprised of $325 million of share repurchases and $217 million in dividends.

In the March quarter, Delta achieved a number of milestones across its five key strategic pillars.

Named one of Fortune magazine's Most Admired Companies for the fifth consecutive year.
Named one of the 2018 Fortune "100 Best Companies to Work For" for a second straight year.

Increased efficiency through upgauging strategy with domestic seat capacity increasing 3.4 percent on 0.9 percent higher departures in the March quarter. As part of its re-fleeting, Delta added 43 more Boeing 737-900s and Airbus A321s into service, contributing to the 105 additional AVOD equipped aircraft across the fleet year-over-year.
Received final approvals from regulatory authorities for new joint venture partnership with Korean Air, offering one of the most comprehensive route networks in the trans-Pacific market.

Made a $500 million voluntary contribution to the pension plan and ended the quarter with an unfunded liability of $6.3 billion, a $642 million reduction from the end of 2017.

The prior periods presented here have been recast to reflect adoption of these new standards. In addition, Delta made the following changes to its income statement:

Delta is no longer disaggregating passenger revenue by mainline and regional carriers.
Ancillary business expenses have been consolidated into a single operating expense line item.
Regional carriers fuel expense is now reported within aircraft fuel and related taxes instead of within regional carrier expense.

Special items for the quarter consist primarily of mark-to-market adjustments on refinery fuel hedges and unrealized gains/losses on investments.

AEGEAN: 12% growth in total traffic in the first quarter of 2018, reaching 2.4m passengers