Placed seven wide-bodies on long-term leases in 2017
Acquired 40 aircraft during the fourth quarter for $920 million, and a record 68 aircraft for the full year
Committed to acquire fourteen additional narrow-body aircraft in 2018 for more than $540 million
Sold eight aircraft during the fourth quarter and 37 aircraft for the full year; full year sales included three wide-bodies, four freighters, and our last six classic aircraft
Declared our 47th consecutive quarterly dividend
(1) Refer to the selected financial information accompanying this press release for a reconciliation of GAAP to Non-GAAP numbers.

Commenting on the results, Mike Inglese, Aircastle's CEO, stated, "With $148 million of full year net income, Aircastle had a great 2017 and a strong fourth quarter. Throughout the year we worked diligently to extend and transition the leases on seven wide-bodies while selling another three. As a result of these efforts, we have taken care of essentially all of our 2018 lease placement activity. We also opportunistically sold four freighters and our last six classics. Aircastle's aircraft portfolio is in great shape and is well balanced."

Mr. Inglese concluded, "As competitive investment market conditions are expected to persist into 2018, we believe that Aircastle will once again benefit from our outstanding team, a strong balance sheet and a nuanced investment approach that prioritizes flexibility and disciplined growth, in order to maximize risk-adjusted returns and increase sustainable earnings and operating cash flow over time. By continuing to execute our strategy, we are positioned to continue to grow profitably and create long-term shareholder value." 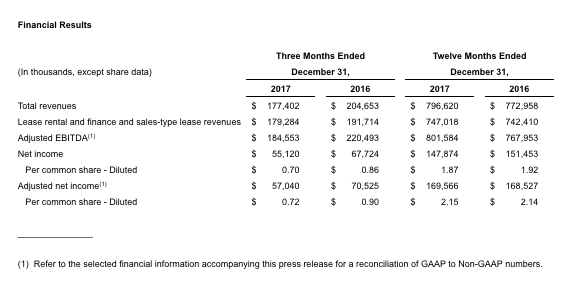 Net income for the full year was $147.9 million, down $3.6 million year-over-year, while adjusted net income was $169.6 million, an increase of $1.0 million. Higher total revenues of $23.7 million, higher gains from the sale of flight equipment of $16.0 million, and lower interest expense of $14.4 million offset higher aircraft impairment charges of $51.8 million.

Adjusted EBITDA for the full year was $801.6 million, up $33.6 million versus 2016, reflecting a $22.5 million increase in maintenance revenue and higher gains from the sale of flight equipment of $16.0 million, partially offset by higher SG&A, excluding share based compensation, of $6.5 million, mostly driven by higher personnel costs and headcount.

Total revenues were $177.4 million, a decrease of $27.3 million, or 13.3%, from the prior year. The decrease was due to a $12.4 million decline in lease rental and finance and sales-type lease revenues, and a $12.6 million decrease in maintenance revenues.

Lease rental and finance and sales-type lease revenues were $179.3 million versus $191.7 million the prior year. The 6.5% decrease was driven by lease transition and extension activity, mostly associated with seven wide-body and one freighter aircraft, which represented a combined 10.8% of total fleet net book value at year end.

Net income was $55.1 million, a decrease of $12.6 million, while adjusted net income declined by $13.5 million to $57.0 million. Lower total revenues of $27.3 million and a $5.0 million reduction in gains from the sale of flight equipment were partially offset by an $11.3 million decrease in interest expense and lower depreciation of $6.1 million.

Adjusted EBITDA was $184.6 million, down 16.3%, or $35.9 million. This was primarily driven by lower maintenance revenues of $12.6 million, lower total lease rental and finance and sales-type lease revenues of $12.4 million, and a $5.0 million decline in gains from aircraft sales in the fourth quarter of 2017.

During the fourth quarter of 2017, we sold eight aircraft, including one freighter and our last five classic aircraft, for total sales proceeds of $68.6 million and a gain on sale of $19.2 million.

During the year ended 2017, we sold a total of 37 aircraft and other flight equipment for proceeds of $833.6 million and a gain on sale of $55.2 million. The average age of the 37 aircraft sold was 13.8 years with an average remaining lease term of 4.2 years.

Our fleet utilization for the fourth quarter was 99.5% and 99.3% for the full year 2017. As of December 31, 2017, Aircastle owned 224 aircraft having a net book value of $6.7 billion. We also manage twelve aircraft with a net book value of $641 million on behalf of our joint ventures with Ontario Teachers' Pension Plan and IBJ Leasing of Japan. 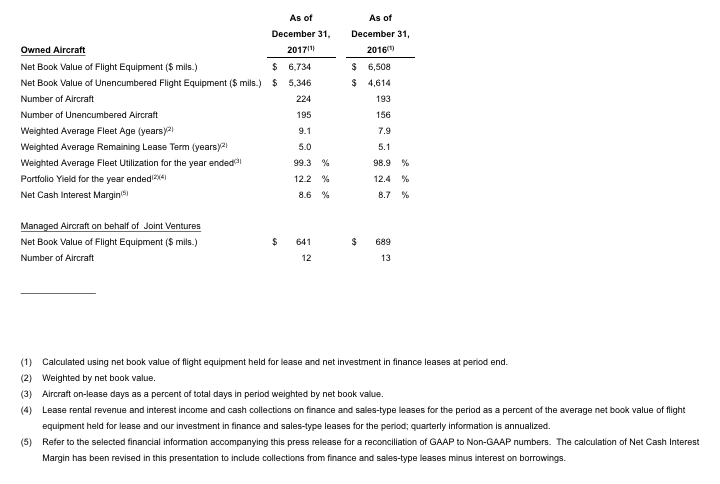