Net losses after tax stood lower at €30.8m from €35.8m in 2017. The Group operated 3% more flights in the first quarter, offering 7% more seats but also significantly improving its load factor from 76.8% to 81.2 % despite the increased activity during low season.

Traffic in the international network increased by 16%, with the main contributor international traffic out of Athens Airport rising by 18%. Domestic traffic grew by 9%.

Outlook for summer demand remains positive, despite the significant increase of competitor capacity. Recent further increases in the fuel price will however have an impact on our costs despite our effective hedging policy.” 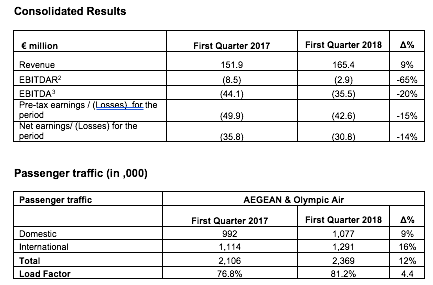 The Group adopted IFRS 15 Revenue from contracts with customers as of January 1, 2018. The standard allows for revenue to be recognized when the good or service has been transferred to the customer. The Group has already in previous years recognized revenue for its fare revenue in a manner consistent with new IFRS 15, ie when the service has been provided (flight date) and not when the service has been sold (booking or sale date). Nevertheless, for certain revenue streams (such as baggage revenue, rebooking/reissue and other ancillary revenues) revenue had been recognized in previous years, in accordance with IAS 18 on the date of sale. The change in accounting treatment which recognizes total Group revenue on the flight date and not on the sale date had a negative impact of €5.71m on group revenues in the first quarter of 2018. The Group has also adjusted the recognition of certain distribution expenses, recognizing the expenses which correspond with the revenue recognized on each period. The change in the accounting treatment of distribution expenses which are now recognized at the flight date versus previously at the sale date, has reduced distribution expenses by €4.48m in the first quarter of 2018. As a result, the net change in recognition of revenue and expense items had a negative impact of €1.23m on the consolidated operating and pre-tax results for the first quarter of 2018.

Given the EU directive 2013/50/EU which was transposed into Greek law (L.4374) in April 2016, AEGEAN issues trading updates with key financial and operating performance indicators for the First Quarter ending March 31 and 9-month period ending September 30 and detailed financial reports and statements for the First Half ending June 30 and Fiscal Year ending December 31.